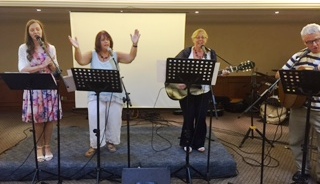 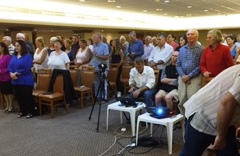 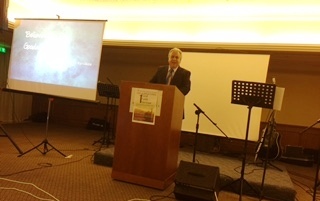 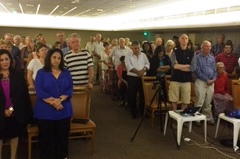 It is 11:30 pm and I have we just returned from a United gathering of believers in Paphos.

It was an evening to be remembered as it left a mark on all of our hearts and minds who gathered together to celebrate our oneness in Christ.  The atmosphere was charged with the presence of God from start to finish. The worship was anointed and the people sang and rejoiced with all of their hearts with shouts of joy and praise as we all lifted our voice in one accord giving thanks and praise to our Saviour Jesus Christ.

I personally do not ever recall such an anointing, such a tangible presence of the Lord in any of the meetings I have been present in Paphos.  Tonight, I felt we broke through much resistance in the spirit and the powers of darkness were delivered a heavy blow.

Then there was time to deliver the word; there was freedom and much liberty in the spirit to deliver the word with a strong prophetic anointing.  I believe God spoke directly to His people, heart to heart, and they were encouraged, edified, and inspired in their faith.  The central theme of the message was aimed at encouraging people to believe again in the goodness of the Lord, emphasizing that it is the goodness of God that leads us to repentance (Romans 2:4).

At the closing of the meeting, Ps. Tim brought a short exhortation from Revelation 2:1-4 exhorting us to return to our first love.  In response to the exhortation the pastors came to the altar and we were led in a prayer of confession and repentance renewing our commitment to the Lord and to His people to shepherd, nurture, and feed His sheep as He has commanded us to do.  We then prayed together in agreement asking the Father for mercy and grace so that we may represent Him accurately in our spheres of influence.

I sensed in my heart that tonight was a night of breakthrough for the Church in Paphos – light pierced the darkness – and God’s voice was heard loud and clear.  I believe that this is just the beginning of great things that God has in store for His church in Paphos.

In closing I would like to emphasize the following: when the spiritual leadership of a city decide to come together and agree on anything they would ask the Father, heaven moves on their behalf.  The forces of darkness have no defense against the unity of God’s people.  This evening’s gathering was planned and organized by the pastors of five congregations in Paphos.  The unity of these leaders was evident, visible and tangible, and God blessed their efforts with His tangible presence, encouraging and edifying His church for the battle ahead.

Thank you to all our intercessors who behind the scenes have prayed for this event and laboured behind closed doors petitioning the Lord for a great breakthrough.  I want to say with confidence that your prayers were heard and answered, and God’s precious people were blessed and encouraged in their faith.  Not only that, but the principalities and powers of darkness over Paphos were delivered a heavy blow from which there is no recovery.

I would like to share with you some feedback that I received from Ps. Tim who pastors Calvary Church in Paphos.  He writes:

Yea, I agree. It was a great evening.  The Spirit of the Lord was abundant.  It was a timely Word.  A real sense of unity and joy.  It was a powerful testimony to the principalities and powers.

We need wisdom and grace to stay the course and build on what God has done. The enemy won’t sit idly by and let this happen unopposed.

My greatest hope was that at the ‘joint-church’ service there would truly be an atmosphere that everyone, from charismatics to baptists, would feel God’s presence and freedom.  I know it’s impossible to please everyone all the time, but I strongly hoped we’d find the middle ground.  I feel the future of the unity depends on people knowing they can come to an event where they have that confidence.  I believe we accomplished that and it was to His glory, and all will spread the word and come again next time.

All glory to our King Jesus to whom belong praise, honour, glory and thanks!
Andreas